A selection of recent programmes produced and presented for the BBC:

41 interviews with leading academics, each of whom has a bold and original idea.

Miss Simpson’s Children. The amazing tale of how one woman helped save lives: 16 of her ‘children’ went on to win Nobel Prizes.

Checkmate Me in St Louis. How St Louis has become the chess capital of the world. Can the game of chess serve to lessen racial tension and unite its citizens across the board?

Read an article about it here.

The Science of Evil.

How the science of social psychology emerged from the Holocaust.

The Why Factor: Why Are We Conscious?

More or Less: Chess Cheats And The Goat

Analysis: Why worry about future generations?

Analysis: Can We Teach Robots Ethics?

Analysis: Will Humans Survive The Century?

Analysis: Are We All Racist?

A programme about implicit  bias

Analysis: Will They Always Hate Us?
The Middle East conflict and other long-running international disputes have so far proved incapable of resolution by war or traditional diplomacy. So are the parties fated always to hate each other?

Analysis: The Charitable Impulse
How do we persuade people to give more?

Analysis: The Myth of the Mob
Are crowds inherently dangerous?

Analysis: The NHS, AI and our Data

Will a combination of data and AI transform the future of the NHS? 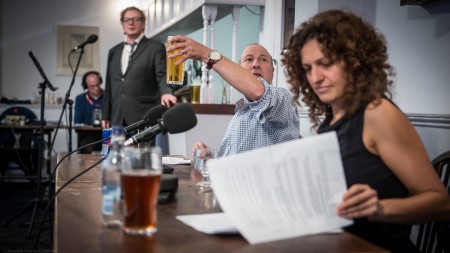 Matthew Sweet examines philosophical problems with a live audience in a pub.

Six series, broadcast between 2011 and 2017 on BBC RADIO 4. Podcasts of all episodes available indefinitely.

Across The Board. Dominic Lawson conducts a series of interviews over a game of chess. Featuring Steve Davis, Piers Morgan, Lennox Lewis, Sol Campbell and Garry Kasparov.

Fifteen episodes over three series, broadcast between 2013 and 2015 on BBC RADIO 4. Podcasts of all episodes available indefinitely.

The Ferryhill Philosophers. David is the philosophy consultant to this continuing BBC Radio 4 Drama Series, written by Michael Chaplin. The first series aired in 2015.